"Surviving is the most difficult thing nowadays, Everyone is out for themselves, I just hope we find a way of this hell of an island before we end up dead or worse."

Riley is a member of the Ravens, who appears in The Dead Island Manga series, He is one of the main protagonist of the series. He is a lieutenant of the Ravens, and oversee's the bases and safehouses of the gang. He is very kind towards his friends and other survivors, and is quiet during most group conversation, but is really outspoken at other times. He is very feminine and happy most of the time, and only participates in zombie killing if he has to. He is very sarcastic and sort of lazy, but makes up for it with his accuracy.

Riley was a weak child, never carrying for sports or outdoor activities in general, he always showed a passion for drawing and art. He also loved playing video games, and wasn't very social, except for his group of friends, he never really spoke to anyone. Riley grew up, not really carrying much about what people think of him, openly expressing his sexuality when he received hate for it.

"People hate anything that isn't normal, they mistreat anyone who they don't accept as "Good Enough." But, screw them. Those type of people aren't worth my time,I have a life to live, and i'm going to live it to the fullest. They go on and on about it's weird and crazy to be different, hating others for their skin color, or their sexuality, but I don't let that hold me down. I am a very happy person actually~, I've come to this beautiful island of Banoi to enjoy my summer, and i'm enjoying it one way or another. My friends are amazing and this is going to be the best summer ever!"

Riley, noticing A Walker for the first time

Riley, exhausted after a supply run 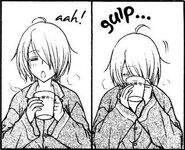 Riley, drinking coffee the morning of the outbreak
Add a photo to this gallery
Retrieved from "https://deadislandfanon.fandom.com/wiki/Riley?oldid=4047"
Community content is available under CC-BY-SA unless otherwise noted.